During the thousands of kilometers traveled last spring, in Estonia the Putan Club was supported by Valge Tüdruk at the Genialistide Klubi in Tartu. In front of so much courage, political slap but also groove and salutary & healthy provocation, the iconoclastic duo had promised to invite the White Girl on their roads. This terrorist, dancer, disbeliever and vengeful double-bill is now available for March 2023. Three people on the road.

...Every Putan Club gig is a kick in the face of modern music and its industry. ...They are defiant not because it’s cool to do so, but because that is what they are at their core : non-conformists... Insubordination : that is Putan Club..."   MUSIC & RIOTS MAGAZINE (UK)

The Putan Club is intended as a resistance cell, characterized by a mode of doing (force actions in various places)very close to the first plots of European partisans during the last world war and today by opponents from all over the world.

Resistance is organized by the archaic and immediate means of our century : electric voices and rumors, tanks and counted words, like saying from cave painting to the most daring conceptualism, from avant-rock to contemporary classical music more brutal techno/house, from the kiss on the mouth to the kick in the ass....

A duo, from Italy and France, based between Agrigento and Faro. Voices, guitars, bass & computer. The PUTAN CLUB is standing for feminism, electricity, electronics & savagery - as if Jeff Mills violated The Birthday Party: groove and high tension. Trance, Dance and Challenge.

The Putan Club does not belong to any church (rock, techno, jazz, avant, punk, world or what-the-fuck-ever) but claims the right to be all that, even more. And proved it, from Laâyoune to Beijing. Finally, the PUTAN CLUB collaborates regularly with other demons such as Lydia Lunch, Eugene S. Robinson or Denis Lavant.

With an average of over 150 concerts a year, over 2000 concerts since its creation, regularly on Tour in Europe, China, Turkey, Africa and Central Asia as well as part of numerous festivals as Bazant Pohoda ( SK), Tomorrow Fest (Shenzhen, RPC), Milhoes ( PT), Croisements festival (Beijing, RPC), Amplifest (PT), the PUTAN CLUB is iconoclastic, violent, groovy and and resolutely feminist-revolutionary.

"...Every Putan Club gig is a kick in the face of modern music and its industry.

...They are defiant not because it’s cool to do so, but because that is what they are at their core : non-conformists...

Valge Tüdruk (white girl) is an independent provocative performance art act who’s focused on raising controversial issues (gender/poverty/politics/ignorance). Her goal is to reflect on current social situation and make it into hard (in Estonian "kõva") music and performance. Ravescape.

The name itself Valge Tüdruk criticizes the privileges of a basic Estonian girl. His provocations gave her a great visibility. Valge Tüdruk is not afraid of anything or anyone and has been invited to all kinds of artistic & cultural events.

She recently collaborated with the Estonian Sabotage Union to provoke people to question their lifestyles and their choices.

Valge Tüdruk latest pieces are "Avtobus" and "Eat Your Own Shit Dog in a Good Way".

"Magic magic my ass/life is a magic trick

It needs a beton supportive mechanism

I don’t fit where there frame is concrete 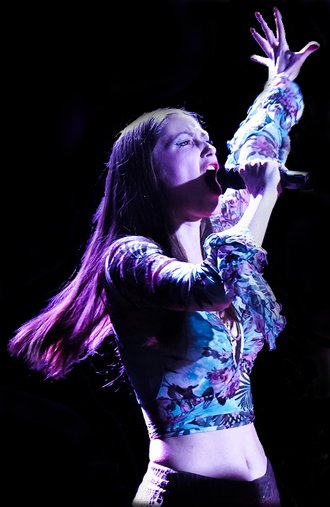